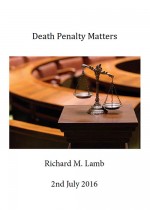 The Islamic terrorist fears the public moral condemnation of the sentence of death and hanging (i.e.: that deeply humbling process) as opposed to dying in the flagrant and “glorious” execution of their murderous attacks. The latter is seen as bravery by these Islamist “fighters”. The former as the power of the judge passing sentence for these grave crimes of murder and approaching murder recognised as such by these religious Islamist terrorists and their controllers. That is the psychology enunciated in my 1st May 2016 paper. They do not refuse to recognise the Court as the Irish Republicans used to do in years gone by Hanging by Judicial command cannot be seen as ‘killed in action’ by any stretch of the imagination - even by these Islamic terrorists. Such a view would be gravely maladjusted in the eyes of their public. Sadam was hanged in Bhagdad following a criminal Judicial Trial in Iraq. The trial Judge passed the Death Sentence (Iraq Judge). That judicial execution, so hard won, was crucial to the victory of the New Iraq Democratic Administration over Sadam’s hated old regime. Even the Islamist “fighter” and Arabs recognise the moral force of the properly carried through Death Penalty after the judicial process.

This morality is universal I argue in the Natural law and the Law of God as it may be described. These Islamist terrorists believe in Allah and God the Father - as we Christians do. They believe in Heaven and Hell and the last Judgement without doubt. What I am saying is the religious beliefs and moral convictions of these terrorists lead them to fear our criminal justice based on the morality of “Thou shalt not kill”. The death in battle scenario involves no such due process - it is seen as valiant by them. Judicial execution is the working out of the moral law or Natural Law since time immemorial, if restored. It fixes the Islamist terrorist with turpitude and obloquy. That legal process will truly “startle” this terrorist in the interior of his heart to the realization of his misdeeds and wrong-doing. Only the Death Sentence carried through to execution achieves this effect for the Islamist Defendant and his followers. In the West we have lost the belief in the moral power of the Death Sentence for murder and in this natural Law/God’s Law. The more we “disregard” these murderous attacks on the innocent where-ever the greater confidence we give these deadly Islamic terrorists. This “disregard” of murder is manifested in the abject failure of our Lawmakers Judges and Advocates to “grasp the nettle” and restore the Death Sentence (discretionary) fro murder and related crimes. Christianity up to 1945/46 and the Nuremberg Trials adopted this Natural Law and its centrepiece was Europe. Sadly no more!

Section B: The Death Sentence/Condemnation to Hell

All these terrible and wanton perpetrators of murders and related crimes require us morally to reactivate the Death Penalty now and maintain that sentence of death in our Rule of Law. I say that Final Sentence should be discretionary nevertheless.

The trial judge used to utter on passing sentence of Death that “you will be taken to a place where you will be hanged by the neck until you are dead ” Then as follows: “ and may the Lord have mercy on your soul” followed by the Chaplains “Amen” - all in open Court. I firmly believe this Formula should be reinstated if the Death Penalty is restored to our country of England and Wales. Lord Denning referred to this procedure in his autobiography as it was practised pre - Abolition. The last man to be hanged was Hanratty - single murder by hand gun. He was hanged on 4/4/1962 in Bedford Prison. Hangman: Harry Green. He turned out to be correctly convicted as our Lord Chief Woolf confirmed years later. The Sentence of Death does not usurp the divine Judgement of God the Father when the Capital offender is executed. No man may usurp the Father of us all. What does the Final Penalty do? Firstly it condemns the Defendant to death and commands the Hanging itself. Secondly the condemned man goes to the gallows and the Judgement Seat in that state of mind. The Judge on earth does not possess the right or power to condemn the defendant to Hell. He passes the Death Sentence no more and no less, if he chooses to do so in his discretion. His brother Judges will rule upon a stay of execution, but expedition should be of the essence when it comes to the Death Penalty I believe. Thus I say the damnation of the convicted murderer depends on the Trial Judges’ courage to sentence him or her to death. Without that Death Sentence passed and speedily carried out the opportunity for eternal condemnation is lost for however long he or she lives - may be forever lost. The judge alive must grasp this opportunity, if the Death Penalty should properly be applied to that case.

God works through his people, especially our Judges: They are his instruments yet governed by principle, authority, precedent, freewill and the integrity of their cadre/cohort as the English and Welsh Judiciary. I argue God the Father listens and responds to our Judges with His people. If the English and Welsh Judge Sentences the Defendant to death by Hanging he does it by the people of our Country and by the Law of God, not on some whim or impulse. Such combination is immense in Judicial power and essence.

Yes our creator and Judge Eternal in Heaven may follow the lead of the earthly Judge if inclined in His mercy and wisdom to do so and the Death Sentence is passed with eager desire and earnestness. Our Father in Heaven may follow suit and condemn that executed murderer, or man guilty of an ancillary crime, to the eternal fire. God the Father is the Final Judge of salvation or damnation for the Soul of the executed murderer/related offender to murder. This God the Father, like it or not, may not be merciful if that man dies in the gallows unrepentant and comes before His Judgement Seat so intransigent. Such a soul will be consigned to Hell. It is never too late to be sorry but God the Father is the Judge of the sincerity of remorse and He alone decides that question. Is the sorrow genuine or a sham? There is no place in Heaven for those who pretend to sorrow for Capital Crimes. Those who will not confess and admit their crimes of murder or such ancillary offences, whether indicted or not, have no sorrow in their hearts. That is the plain truth. They go to eternal damnation without doubt. Their own implacability is their down fall.

Christs divine mercy is undivided and undiluted. Through His ever - bountiful sacrificial love He restores and He saves as follows:-

The Irish Republican Cases (1975/76) mentioned in my website essays: I am afraid these three cases are long since over. Guilty verdicts were entered but they were all quashed on Appeal. These cases may not be retried. The appeal Court did not enter acquittals. I do not endorse the platitudinous views of our media and prominent persons that these convictions (Guildford Four, Birmingham Six and Maguire Seven) were wrongly entered on the Register. I consider all these guilty verdicts were by due process arrived and delivered by the Juries concerned. Capital punishment was abolished in 1965. I believe Judicial executions for the Guildford Four and Birmingham Six (not Maguire Seven) would have been right and correct if there had been no Abolition. These were very serious multiple murders cases: cold blooded in execution and premeditated with planning. Anything less would make a nonsense of my Death Sentence polemic argued since 2nd July 2013 in writing by myself. There is no question of the Trial Judge doubting the veracity of these guilty verdicts when entered in 1975/76. These presiding and sentencing Judges would have had to follow the factual bases of these guilty verdicts of murder to pass the proper sentence of Death, if available and warranted. There was no general discretionary Death Sentence pre-Abolition for murders. It was mandatory for Capital murder subject to the Homicide Act passed in 1950’s. Capital murders/as with the Guildford Four and Birmingham Six demanded Sentences of Death if tried pre-1965 and Abolition of the Death Penalty.

The Trial Judges would have been duty bound to pass Sentences of Death on these murder convicts (ten in all) if there had been no Abolition. In the same way Ruth Ellis had to be sentence to death in 1955 for murder by revolver. She pleaded not guilty and was found guilty. The Trial Judge had no choice but to hang her. If the quarrel is with the trial process for these three Irish cases the Appeal Court could not retry or order retrial of these cases. As I say I stand by the quashed verdicts in 1975/76. The quashing could not undo the jury foreman’s announcement of their verdicts in each case (these three trials). The convictions have “gone” but “not guilty” verdicts were not entered by any court in the land. We are left with three Crown Court Trials in 1975/76 and quashed convictions. I cannot aver the Defendants were in truth actually guilty, but I can say they were found guilty later quashed.
That is as close as we will get to it: An impasse.